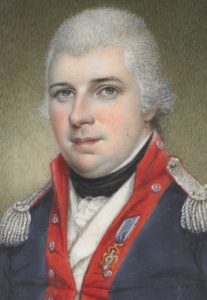 Abstracted from James Archer O’Reilly III, Memorials of the Massachusetts Society of the Cincinnati (Boston 2004), p. 98. Cushing’s duel was mentioned in a recent article, Cordell L. Bragg III “A Fratricidal Affair of Honor,” Cincinnati Fourteen, 54 (2018) No. 2: 20-21, which included the above portrait by James Peale at the Indianapolis Museum of Art. Thomas Humphrey Cushing has been represented in the New Hampshire Society since 2017.