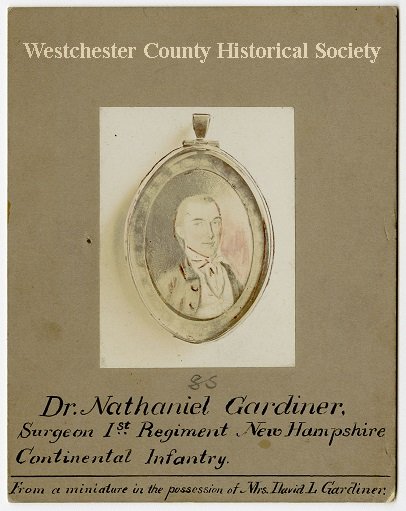 Nathaniel Gardiner was born January 11, 1759 on Gardiner’s Island, located in Gardiner’s Bay between the two peninsulas at the East end of Long Island. The island was (and continues to be) owned by the Gardiner family and their descendants since 1639 when Lion Gardiner purchased it from the Montaukett chief Wyandanch. Nathaniel was the son of Colonel Abraham and Mary Smith (Woodhull) Gardiner.

On June 28, 1780, Nathaniel Gardiner was appointed as Surgeon of the 1st Regiment, New Hampshire Continental Line succeeding Surgeon John Hale. Surgeon Gardiner was detailed to attend to Major John Andre during his captivity. In a twist of fate, the two had met and toasted while Gardiner was on leave to his home in 1776. Gardiner had to depart very quickly to escape detection.

Surgeon Gardiner resigned on December 17, 1782. Nathaniel Gardiner was thereafter a member of the New York State Assembly. In 1790, he resided in New York City, and was a partner in the Merchant Shipping firm of Gardiner, Thompson & Co.

Sources: Frederic Kidder, History of the First New Hampshire Regiment in the War of the Revolution (Albany, 1868), 105; William Abbatt, The Crisis of the Revolution: Being the Story of Arnold and André, (New York, 1899), 61; Francis B. Heitman, Historical Register of Officers of the Continental Army, (Baltimore, 1914), 242; Marynita Anderson, Physician Heal Thyself: Medical Practitioners of Eighteenth-century New York, (New York, 2004), 29, 162; The State of New Hampshire, Rolls of the Soldiers in the Revolutionary War, Volume XVI, (Concord, 1885), 230, 239; The State of New York Comptroller’s Office, New York in the Revolution as Colony and State: Supplement, (Albany , 1901), 44; Mary E. Weigold, Peconic Bay: Four Centuries of History on Long Island’s North and South Forks (Syracuse, 2015), 16–17; United States Department of State, Bulletin of the Bureau of Rolls and Library of the Department of State, Issue 9 (Washington, 1897), 14; Selected Wartime Service Records for Surgeon Nathaniel Gardiner.