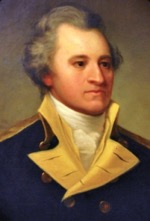 Joseph Cilley was born in 1734 at Nottingham, New Hampshire. Joseph was a self-taught lawyer, Revolutionary soldier, judge, and politician. His father, Captain Joseph Cilley, who came from the Isles of Shoals, was one of the early settlers of Nottingham; his mother was Alice Rollins (or Rawlins). Joseph was married on November 4, 1756, to Sarah Longfellow, by whom he had ten children. He combined the occupations of farmer, lawyer and business man.

In 1758 he joined Rogers’ Rangers and served in northern New York and Canada and was promoted to Sergeant. On December 15, 1774 he was with John Langdon and John Sullivan in the raid on Fort William and Mary at New Castle, New Hampshire.

On March 19, 1779, the New Hampshire Assembly voted unanimously, “that the worthy Col. Jos. Cilley be presented with a pair of pistols as a token of this State’s good intention to reward merit in a brave officer.” These pistols are now housed at the Museum of New Hampshire History in Concord, New Hampshire. Colonel Cilley retired from the Continental Army on January 1, 1781.

After the Revolution he became one of the original 30 members of the Society of the Cincinnati in the State of New Hampshire. He was successively Treasurer, vice-president and President of the Society. On June 22, 1786 he was appointed Major General and commander of the 1st Division of New Hampshire Militia.

He was made justice of the peace and of the quorum for Rockingham County, and held the position for life. In politics he was a Jeffersonian Republican. He was a member of the state Senate, 1790-91, and of the House, 1792, and was Councillor 1797-98. Joseph Cilley died on August 25, 1799, at his home in Nottingham.

Mount Cilley in the White Mountains is named for him.