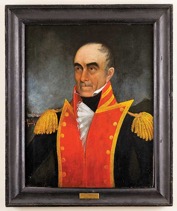 After he returned at the end of the war, Captain Cass married Mary “Mollie” Gilman on December 20, 1781 in Exeter, New Hampshire. Mollie was the daughter of Theophilus and Deborah (Webster) Gilman. She was born in Exeter on August 6, 1759 died on August 13, 1834 at the age of 71 in Muskingum, Ohio. Captain Cass moved from Exeter to Boscawen and built the first house west of Blackwater River in New Hampshire and pursued his trades for some time.

On October 20, 1786 he accepted a commission in the army raised for the defense of the Western Frontier. This earned him the rank of Major in the 3rd Regiment of the Army of the United States. He commanded Fort Hamilton, in Ohio and resigned his post on February 15, 1801. His portrait featured on this page shows him in his uniform as a Major from this time period.

The new U. S. federal government could afford to pay its Revolutionary War veterans only part of their salary in cash. Jonathan Cass got the rest of what Congress owed him by taking part in a drawing in Philadelphia. He chose 4,000 acres of prime land in the Muskingum River Valley in the new State of Ohio where he became one of this area’s first settlers. He arrived at his new property near the Indian village of Wakatomica. This village developed into the town of Dresden, Ohio. He died on August 14, 1830 at age 77. Jonathan’s body was moved to the Dresden Cemetery in 1920.