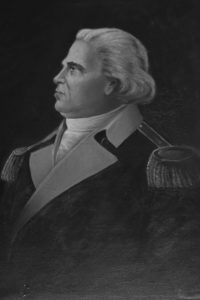 George Reid was born in Londonderry, Province of New Hampshire in 1733. His parents James and Mary Reid were from Scotland. He and was a farmer by profession and married Mary Woodburn in 1765 who was noted for her skill in running their farm in George’s long service during the American Revolution. With news of the Battle of Lexington and Concord, George Reid was appointed a Captain and commanded a company of militia that marched to Boston, Massachusetts. His company would become part of the 1st New Hampshire Regiment in May 1775 and fight at the Battle of Bunker Hill. Captain George Reid was commissioned as a Captain in the 5th Continental Infantry (a temporary designation for the 1st New Hampshire) on January 1, 1776.